Wrist pain often goes hand in hand with neck pain and shoulder pain, When both occur, they need to be treated together. 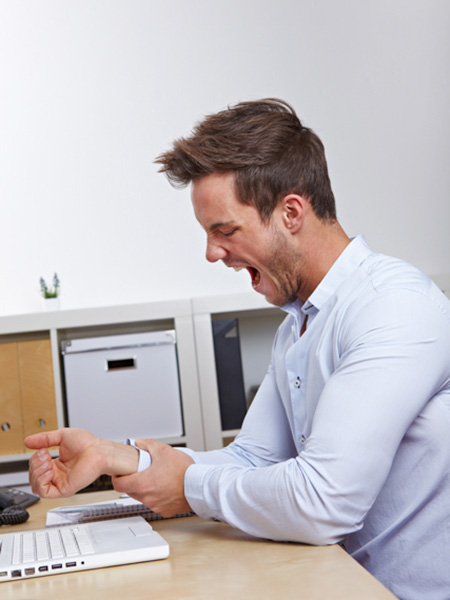 Wrist injuries that result from falls or sports are treated with Physiotherapy and other supportive measures; and they usually heal in a reasonable amount of time.  Repetitive stress injuries are the result of doing too much of one thing such as using a computer keyboard. They are more difficult to cure as patients must change work and/ or life style. 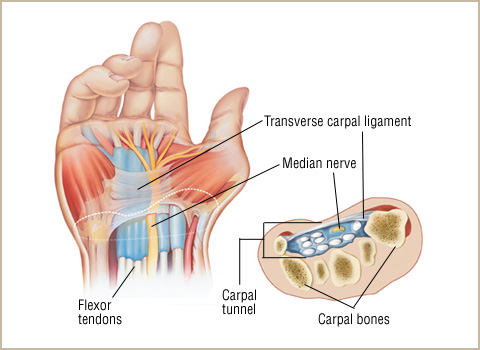 Carpal Tunnel Syndrome is an increasingly prevalent problem in the modern world. The use of computers is largely responsible for this. Using computer keyboards and mouses put unnatural, repetitive stresses on the wrist, hand elbow, and shoulder.

This micro-trauma can result in problems developing in any of those areas. Carpal Tunnel Syndrome is probably the most common of these problems.

The carpal tunnel is a passageway in the wrist formed by eight wrist bones, which form an arc, and the transverse carpal ligament, which stretches across the roof of the tunnel.

Within the carpal tunnel are nine flexor tendons which flex (bend down) your fingers and thumb. Running through the carpal tunnel is also the median nerve, a cord about the size of a pencil containing thousands of nerve fibers supplying sensation (feeling) to your thumb, index, middle fingers, and half of the ring finger.

The median nerve lies directly beneath the transverse carpal ligament and comes in contact with the ligament when bending or straightening the wrist or fingers. 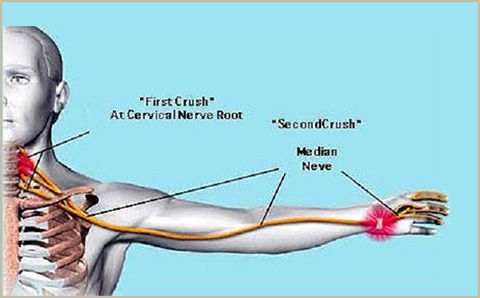 Understanding and treating the Double Crush Phenomena is the key to effectively treating Carpal Tunnel injuries.

It is important to understand that the nerves to the hand originate from nerves that exit from the cervical spine (neck).

Subluxations in the neck often irritate the nerves at their source (the first “crush”) making the nerves at the wrist more susceptible or vulnerable to an irritation caused by subluxated wrist bones (second “crush”).

This is called the “Double Crush Syndrome” and is widely documented in medical research journals. It is consistently found in patients with carpal tunnel syndrome.

In a study published in the British medical journal The Lancet, the authors found evidence of cervical neuritis (nerve irritation in the neck) in 70% of patients with Carpel Tunnel Syndrome.

This important study is repeatedly referred to in subsequent medical journal articles on Carpal Tunnel Syndrome. It strongly supports the significance of cervical (neck) problems in the care of carpal tunnel patients. It is imperative that the vertebrae in the neck area be adjusted by Chiropractic or Osteopathic manipulation, in addition to adjusting the carpal bones of the wrist in the care of patients with Carpal Tunnel Syndrome. 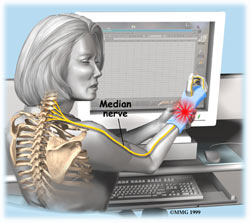 Long distance driving or hobbies such as knitting or woodcarving are activities which involve prolonged or repetitive grasping and wrist flexion may elicit symptoms of Carpal Tunnel Syndrome.

Not all people involved in these types of work or other activities develop Carpal Tunnel Syndrome. Proper work pacing, regular rest breaks, reducing repetition and force, and the use of ergonomically designed tools and equipment can minimize the risk. Determining whether Carpal Tunnel Syndrome is a work-related condition or not can be very difficult.

Symptoms of Carpal Tunnel Syndrome include numbness, burning, or tingling of one finger or more is the most common. This pain and numbness can happen at any time; often these symptoms occur at night and may awake the patients from sleep. It is possible for the pain to extend up the arm, into the elbow, and as far up as the shoulder and neck.

Numbness and tingling may occur when performing everyday activities that involve flexing the wrist or grasping, such as holding a telephone or driving. A decrease in sensation or feeling may result in clumsiness and weakness of the affected hand. Patients may find themselves dropping objects and less capable of performing tasks requiring gripping or pinching strength.

On the palm side of the hand, just below the thumb, is a bulging pad of muscle called the Thenar muscle group. These muscles are controlled by the median nerve. With advanced Carpal Tunnel Syndrome, this muscle group may begin to waste away, giving a flattened appearance to the palm when compared to the other hand. 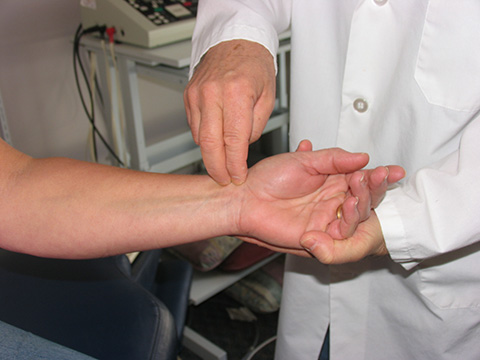 Most Carpal Tunnel Syndromes are treated without surgery. Conservative treatment of patients with mild symptoms involves Chiropractic manipulation of the wrist bones and bones of the neck, micro currant, rest of the hand and arm; and avoidance of activities that may provoke further symptoms. Following recovery, we prescribe exercises to correct the problem in long term.

We sometimes prescribe a splint to be worn to restrict movement of the wrist. Depending on the severity of the condition, the splint may be worn during day and/or night. The splint is worn between 4 to 6 weeks. In the rare cases, where conservative treatment does not achieve the desired results or in cases involving more severe symptoms such as Thenar muscle wasting and extensive weakness and numbness, we refer patients for surgery. Surgery is usually performed on an outpatient basis in most hospitals and clinics. An incision is made on the palm of the hand and the surgeon will cut (release) the ligament forming the roof of the tunnel. This relieves the pressure on the median nerve. Surgery must be followed up with rehabilitation for long-term recovery.